stranded “Greg Mortimer” Australian cruisers will be back on Easter Sunday 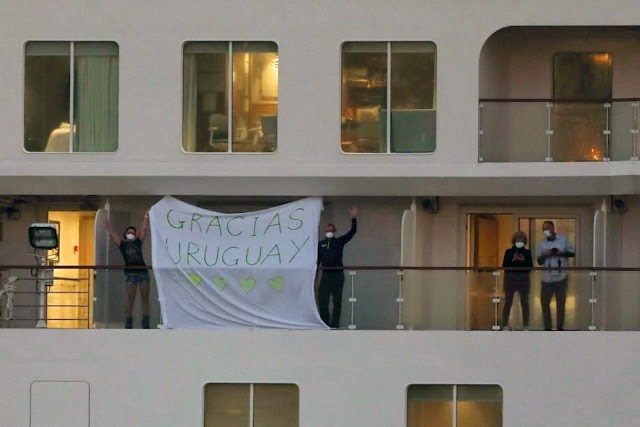 With a large improvised banner reading “Gracias Uruguay” (Thank you Uruguay) on starboard the COVID-19 infected “Greg Mortimer” finally docked in the port of Montevideo on Friday and at 22:00 Uruguay hour started the medical evacuation of over a hundred cruisers from Australia and New Zealand who are to be charter flown to Melbourne, and expected to arrive on Easter Sunday.
The evacuation operation is the culmination of several days of coordination discussions between Uruguay, Australia, with the cooperation of the cruise ship operator Aurora Expeditions and their local agent in Montevideo, Universal Shipping Agency, which helped with the overall operation to end the two-week ordeal of the “Greg Mortimer”, passengers and crew members.
The Greg Mortimer, purpose-built for expeditions to the most remote places on earth, has been stranded 20 km off the coast of Montevideo, since March 27, when it had to change its original course after some passengers fell ill with symptoms of possible COVID-19 cases.
Aurora Expeditions confirmed earlier this week that 128 of 217 people – passengers and crew – onboard, tested positive for the deadly virus after they were all tested by Uruguayan medical teams who volunteered to go onboard the vessel.
After arriving at Uruguay's coast, some 10 tourists with life risk conditions were evacuated and hospitalized in health centers in Montevideo. Five of them have since been discharged and three of those are being repatriated. The rest of the passengers of the cruise ship were asymptomatic or had mild symptoms.
The cruise ship with passengers from Europe, US, NZ and mainly Australia departed from Ushuaia on March 15 to Antarctica, the Falklands, and South Georgia – after the COVID-19 outbreak was declared a pandemic by the WHO -, on a voyage named after the polar explorer Sir Ernest Shackleton, who led British expeditions to the region.
Many cruise ships have been stranded on the high seas – whether infected or not- as countries closing their borders have turned them away, preventing many cruise ships from docking in their ports. Even Australia and New Zealand have banned international cruise ship arrivals due to the COVID-19 pandemic.
In this case, as Argentina, Chile and Brazil had locked borders, air, land and sea, and the Falkland Islands are unable to address such a potential number of cases, the vessel headed for Uruguay, whose authorities have helped with cruise passenger repatriations in similar situations. The US, UK and Canadian embassies in Montevideo have been involved in similar successful operations quite recently and relieved cruisers have enthusiastically thanked local authorities for the humanitarian effort.
Even though some press publications have emphasized the fact that the Greg Mortimer was not immediately authorized to dock in Montevideo, the truth is that since the coronavirus pandemic outbreak Uruguay has safely repatriated 734 cruisers from 41 different nationalities.
https://en.mercopress.com/2020/04/11/gracias-uruguay-stranded-greg-mortimer-australian-cruisers-will-be-back-on-easter-sunday