Uruguay turns its airport into a drive-in

As the pandemic cancels flights, Uruguay turns its airport into a drive-in 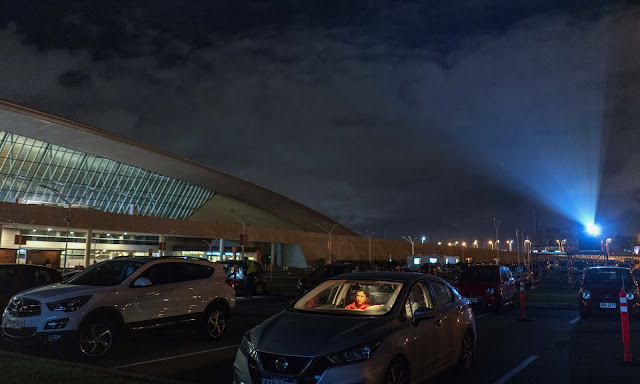 With commercial flights cancelled around much of the world because of the coronavirus pandemic, one country has adapted its main airport to a new use: as a drive-in cinema.
Instead of planes flying in and out of Uruguay’s Carrasco international airport, cars are now arriving nightly for Uruguayans to enjoy a socially distanced movie in the safety of their own vehicle.
“It was fantastic,” said dentist Cecilia Muttoni who recently went to a screening of Sonic the Hedgehog with her 29-year-old daughter. “It was the chance to have a communal experience but with each car being its own private universe.”
Uruguay closed all entertainment venues, including cinemas, when it went into lockdown on 13 March. The country also closed its borders for all air traffic except chartered repatriation flights.
But now, Carrasco airport, located outside Uruguay’s capital city of Montevideo, is showing movies every day. 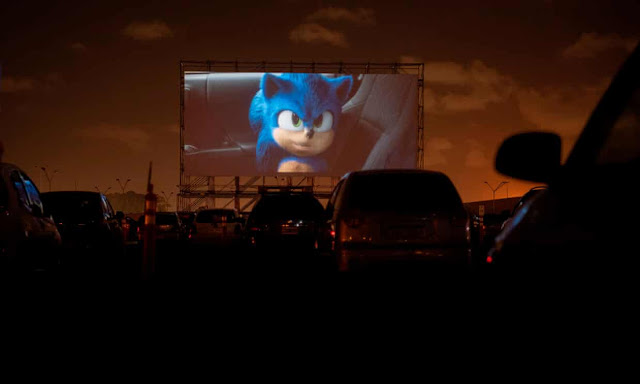 “As a doctor, I’ve been moving around more, but for my daughter, who works at home, it was a great opportunity to go out safely,” said Muttoni.
Among the movies being screened are Bohemian Rhapsody, The Lion King and Joker, among others, for around 100 cars each showing. The movies are projected on a giant 20-metre-high screen and the audio is piped into cars over a dedicated radio channel.
Advertisement
“We are trying for people to stay in their cars as much as possible,” said airport official Mauricio Carluccio.

Coronavirus: the week explained - sign up for our email newsletter

Read more
Special consideration is shown, however, for the enthusiasm of children – some of whom, in their first outing in over two months, have stepped out of the car, as long as they don’t wander far off.
Popcorn and McDonald’s can be ordered via WhatsApp. “You place your order, pay it with a credit or debit card to avoid additional contact and they bring it to your car wearing face masks,” said Muttoni.
Airport toilets have been opened for movie-goers, who must wear face masks outside their cars. The toilet facilities are constantly disinfected and emergency mechanics are on standby in case of a vehicle breakdown.
The promoters behind the project are planning on putting on music shows and standup comedy as well for the drive-in audience.
Uruguay has so far had one of the lowest coronavirus tolls in Latin America, even as the region emerges as a hotspot for the pandemic. The tiny country of just 3.5 million people has had 803 confirmed cases of coronavirus and only 22 deaths so far.
In contrast, neighbouring Brazil has had the second-most cases in the world after the USA, with about 412,000 cases and nearly 26,000 deaths.
Uruguay reacted fast to its first cases in March, with a voluntary quarantine, widespread monitoring and tracking plus randomized tests. The government is still encouraging people to self-quarantine as it gradually starts to reopen.
https://www.theguardian.com/world/2020/may/29/uruguay-airport-drive-in-coronavirus

... we have a small favour to ask. Millions are flocking to the Guardian for quality news every day. We believe everyone deserves access to factual information, and analysis that has authority and integrity. That’s why, unlike many others, we made a choice: to keep Guardian reporting open for all, regardless of where they live or what they can afford to pay.
As an open, independent news organisation we investigate, interrogate and expose the actions of those in power, without fear. With no shareholders or billionaire owner, our journalism is free from political and commercial bias – this makes us different. We can give a voice to the oppressed and neglected, and stand in solidarity with those who are calling for a fairer future. With your help we can make a difference.
We’re determined to provide journalism that helps each of us better understand the world, and take actions that challenge, unite, and inspire change – in times of crisis and beyond. Our work would not be possible without our readers, who now support our work from 180 countries around the world.
But news organisations are facing an existential threat. With advertising revenues plummeting, the Guardian risks losing a major source of its funding. More than ever before, we’re reliant on financial support from readers to fill the gap. Your support keeps us independent, open, and means we can maintain our high quality reporting – investigating, disentangling and interrogating.
Every reader contribution, however big or small, is so valuable for our future. Support the Guardian from as little as $1 – and it only takes a minute. Thank you.

The 12 Best Uruguayan Artists and Bands To Know Uruguay pulsates to carnival sounds, particularly the candombe: a style of dance and music brought over by African slaves that is now an important component of Afro-Uruguayan culture. Tango is also integral to Uruguayan music – although the legendary Carlos Gardel is not included in this list, as his birthplace is very much debatable! So let us introduce you to 12 Uruguayan bands and artists to listen to while drinking yerba mate. El Kinto     In the 1960s, the global phenomenon of Beatlemania spawned imitative bands in Uruguay such as Los Shakers and Los Mockers. Yet the emergence of El Kinto in the late 60s permanently changed the musical landscape in Uruguay. Much like the Tropicália movement in Brazil , the group was influenced by western music and yet produced songs that were noticeably Uruguayan in character: Candombe Beat. This new sound – rhythmic 60’s psychedelia – gave Uruguayan bands a new template
Leer más 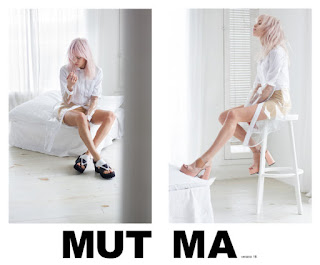 The top five designers from Uruguay you need to know Located between two giants like Brazil and Argentina, Uruguay has been forgotten when it comes to fashion until now, says WGSN contributor Augusta Adriasola Best known for football and politics, this tiny country in South America (with a population of just over 3 million people) is slowly developing its fashion industry and a new generation of young, talented designers are starting to innovate in a country where tradition is the most important thing. From shoe designers to print and denim experts, these up-and-coming talents are surely worth paying attention to, learn their names now. MUTMA Probably one of Uruguay’s most successful brands, MUTMA (formerly Mamut) stands out for its unique shoes and accessories, that guarantee both comfort and style. Using excellent quality leather as the main material, MUTMA– ran by three women – has caught the attention of Urban Outfitters and Assembly New York, with both
Leer más